skip to main | skip to sidebar

Just, you know - doing my thing.

So, I made a thing recently. I do that a lot. 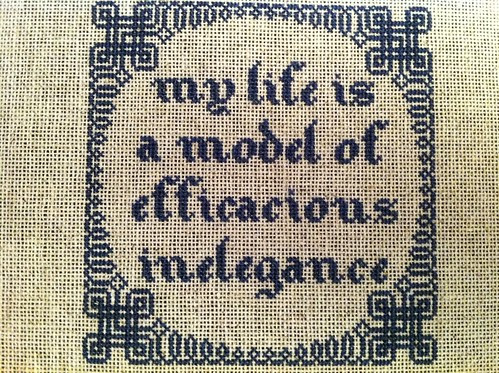 The text is a quote from this post by Merlin Mann.

As I designed it, stitched it, and took pictures to share it with the world, I found myself feeling a little weird about it. I've stitched things Merlin Mann has said before. In fact, I've done it three seperate times. I found myself wondering if that might seem a little creepy or weird. Would I get a cease and desist letter? Would my friends and family stage an intervention?

So I was actually a little nervous to share it. It turns out that I did not have to worry, and that it was received very favorably.

The experience has reminded me of something important, though, and that is that I should keep doing what I am doing because I enjoy doing it. End of story.

In Gigantic, the documentary about They Might Be Giants, Ira Glass said that if John Linnell had never been in a band and was a guy with a 9-5 job, he would probably still spend all of his spare time writing songs because that's what he's supposed to do. I really love that idea, and I'd like to think that I'd still be making these odd little things even if I didn't have an internet community to share my work with. I am really glad that I don't have to find out, though. :)
Posted by beefranck at 8:47 PM 2 comments:

Here's the details, shamelessly plucked from Jamie's post about the show at Mr X Stitch: 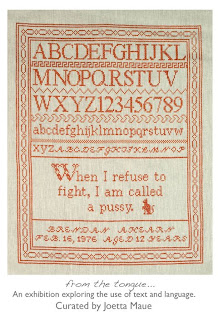 I can't even begin to tell you how excited I am to have a piece in the show, and how amazed I am to know it will be sharing the same space with pieces by these incredible artists. I feel very blessed.

If you're in New York City, be sure to stop by and check out the show - and if you happen to take a whole bunch of juicy pictures and share them, well, that would be awesome, too. :)
Posted by beefranck at 8:00 AM 4 comments:

What's in Your Bindle?

When I was a kid, I used to run away. Seriously. I'd actually pack a bindle like this one stitched by the talented Adam Moe. 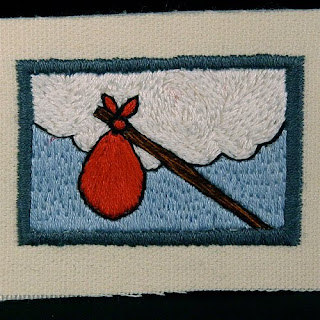 I'd pack a book, a sandwich, and my yo-yo, and go hang out in the wooded area behind our neighborhood. Even when I was gone long after the sun went down, nobody ever missed me.

The urge to run has come back. When I get to the office in the morning, or when I am on my way home at night, I find myself thinking: "What if I just kept driving?"

But I don't have anywhere I could go. And there are some people who might actually notice. Besides, I don't even know what I'd put in my bindle.

Being a grown-up sucks sometimes.
Posted by beefranck at 6:53 AM 6 comments:

Hi everyone! How's every little thing?

What? Why are you looking at me like that? Just because I haven't posted anything here for 10 months?

Well, I've got a good reason for it. I've been going through a blue period. No, I'm not comparing myself to Picasso. It's just that a lot of the stuff that I made was monochrome, often blue, like this one: 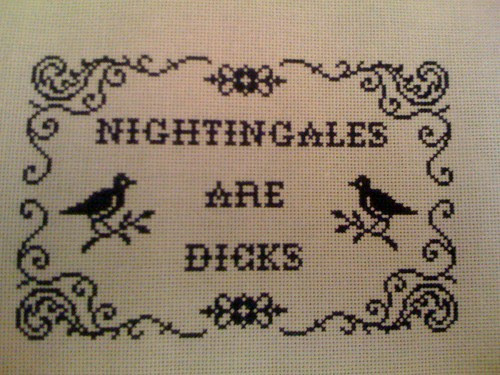 This one's green, but you get the idea: 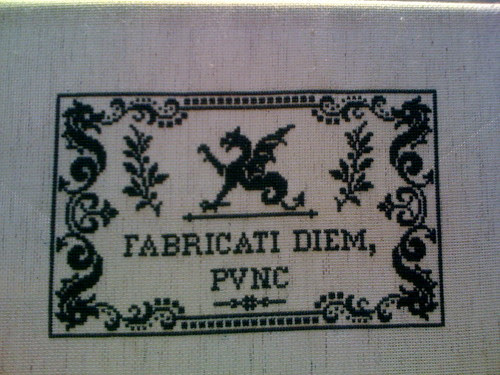 And the pattern for this one is for sale in the Mr X Stitch etsy store (WHAT I AM JUST SAYING WHAT.): 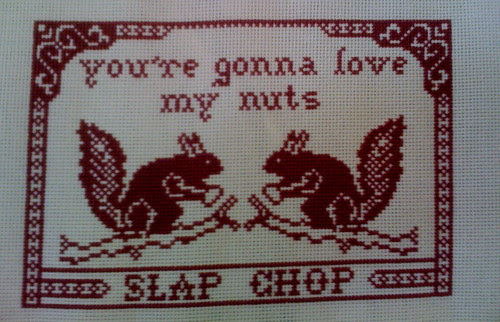 Someday soon I hope to start stitching in color again. Or at least more than one color. :)

Besides that, I've been doing all the normal stuff, like writing at Mr X Stitch, hanging out at the Phat Quarter and the Mr X Stitch page on Facebook, and recording Emergency Pants.

I've also been putting together posts for the Craftster blog and Feeling Stitchy, which is a huge honor, and I have to admit, a bit surreal. Craftster and Feeling Stitchy were huge inspirations for me when I first started cross stitching, and I never would have dreamed that I'd ever be contributing anything to either of them. :)

The really, really big news, that I wanted to share with you, though, is that Jamie (Mr X Stitch) and I have started a podcast - Stitching n Junk! My brother from a European mother and I chat about stitching, interview some of the coolest people in the stitchiverse, and goof off a bit. Check out the first episode here and you can hear our interview with Julie Jackson of Subversive Cross Stitch fame. Eeeeeeeeeee!!!!! :) We've really enjoyed putting it together, and we hope you'll like it, too. :)

I just thought I'd take a moment to share some of those things here. Sometimes I feel as though I'm a little overexposed on the internet - flickr, twitter, tumblr, Facebook, Crafster, Feeling Stitchy, Mr X Stitch, Emergency Pants and now Stitching n Junk too? How much of me should I expect people to take, anyway? :)
Posted by beefranck at 3:40 PM 4 comments:

Is this thing on?

So. Um. It's been awhile, huh? Sorry about that. MrXStitch has been keeping me pretty busy. I'm just realizing today that I haven't posted my last few projects on Craftster! Scandalous! I will remedy this soon, however.

Anyway, I've made a pile of stuff since the last post. Some of it you really have to read the flickr post to understand. Here's a few others: 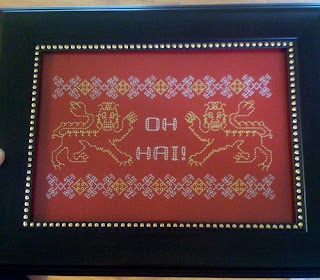 This was for a swap with the amazing Mimi, who I love. She made me this. Yes, I cried when I received it. :) 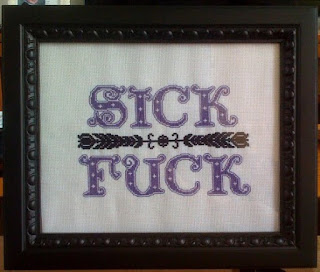 I made this pattern for The AntiCraft and sent the actual stitch to my craft kindred spirit, Valued Sony Customer, because she is one. :) 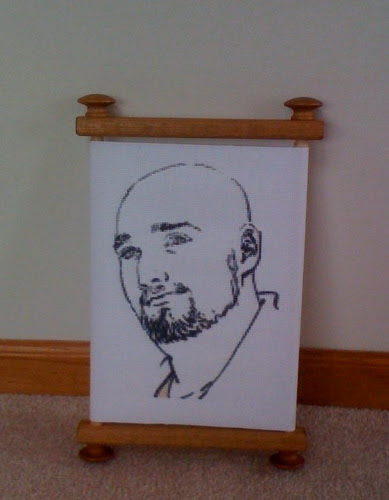 This was a big mother. I made this xstitch portrait of Jamie when Ruby42 came up with the idea and pattern and asked me to stitch it because she thought it would make the most sense coming from me.

I was more than happy to do it. He's an awesome guy and a great friend who is always good for a laugh. :) You can hear that for yourself if you listen to the episodes of Emergency Pants podcasts he's made guest appearances on - check them out here.

Speaking of MrXStitch (see what I did there? Seamless segway!) it is the first birthday of the site today! Woo-hoo! To celebrate, we're giving stuff away EVERY DAMN DAY. Seriously! Look for the posts that are titled "Giveaway Time!" each day for the next week and be sure to comment on those posts and you could win! Here's a list of the stuff you could win:
It all starts today with this post. Check it out!
Posted by beefranck at 6:52 AM 8 comments:

Hey everybody! I've been doing a lot of stitching lately thanks to some swaps I've been involved in. Here's a quick update about all the swappy goodness.

Penny Nickels and I did a personal swap. I know, right? I can't believe how lucky I am! ^_^ It was pretty intimidating, to be honest, since I've been a fan of hers for awhile.

This is what I ended up making and sending to Penny: 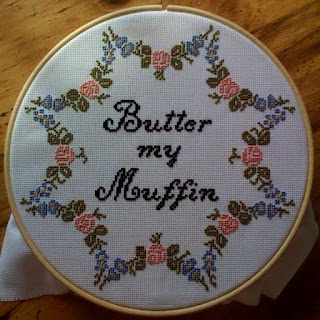 I was inspired by Trixiedelicious and her pretty and subversive china plates.

And this is the amazing dirty pillow I got from her: 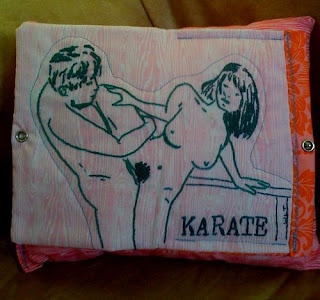 I absolutely love this. Sure, it made me turn a few shades of red, but that just means it's working! :)

I'm also involved in a swap at the Phat Quarter, the flickr group Mr X Stitch and I started. The theme of the swap was anatomy, and I was totally stumped when trying to think of a topic. Internet saved me. I was inspired by Pietro Aretino and his Sixteen Postures as provided by the pornokrates website, where a gentleman referred to his member as a "ruthless organ." 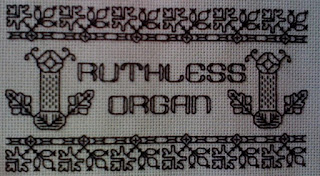 The stitch practically designed itself after that. :) The... um... well, let's just call them what they are... the penis flowers are an original design. I sent to Meagan Ileana, who is an amazing artist. It isn't nerve-racking at ALL to send to someone like her. Nope. :)

I'm going to be getting my swap piece from Julie Jackson of subversive cross stitch fame - how exciting is that? ^_^

Now I've got to work on my entry for the AntiCraft, and of course keep posting over at Mr X Stitch. You really need to check things out over there if you haven't already. It's pretty damn awesome.

Thanks for looking! See you next time!
Posted by beefranck at 9:09 PM 5 comments:

Hey folks! Thought I'd post over here for old time's sake. I've been posting over at Mr X Stitch and that along with Emergency Pants has been keeping me pretty busy. Not too busy to stitch, though!
I did a couple of Dr. Horrible stitches: 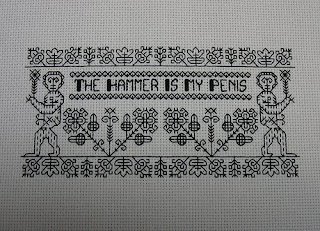 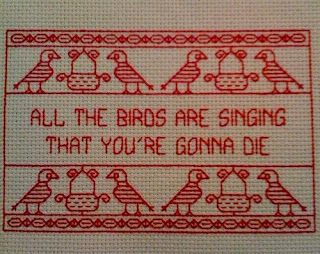 And this one - Emergency Pants listeners will know who sent me the link that inspired this stitch: 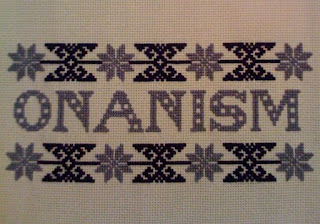 Thanks for looking, and please be sure to make your way over to Mr X Stitch to see all kinds of great stuff. Mr X and I also started a flickr group, Phat Quarter - please join and post your stitchy stuff there!
Posted by beefranck at 8:01 PM 10 comments:

beefranck
I stitch naughty words onto fabric. I love robots and monsters. I often panic while making sandwiches.

This is a Flickr badge showing items in a set called Cross Stitch - originals. Make your own badge here.